(I started writing this entry back in early April, but I only finished it in July.)
I finished my book for March only a day or two before the end of March. The prompt for March was "Countries and Cultures," asking you to "Read a book set in a country, or about a culture, that’s different than your own and that you’d like to learn more about." I chose to read The God of Small Things, by Arundhati Roy. It is set in India in the 1960s/1990s, flashing back and forward between the two time periods. To be honest, I found it a little slow at the beginning, but the pace definitely picked up. It was also...kind of hard to read, not because it's a bad read, but because it's kind of sad and deals with some difficult topics. The style of telling is also a little different, but I think it fits the characters.

It's certainly an interesting read for someone not really aware of the social class/caste system in India, as an important part of the book is one upper class Christian family's interaction with a young man in the Untouchable caste and how that association affects all their lives. This really had me thinking about why humans (and maybe all animals?) seem to have this need to separate ourselves into classes, and particularly why we not only separate ourselves in such a way but actually completely demonize some other classes. I kept thinking about how poor people all over the world are blamed for things and dehumanized. Roy does a great job of really illustrating how unfair this sytem is and how the prejudices associated with caste systems ruin not only lives in poverty but the more wealthy lives as well. The book is well-written, though it is a tough read at times. There are some sexual themes in it and moments of child abuse that can be tough to read. However, I think it does a great job of psychological exploration. In general, I would recommend it, though if you prefer lighter reads, this may not be the book for you. 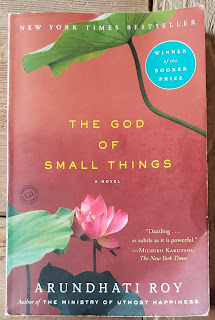 Buy it on Amazon
Posted by Starship Hecate at 4:15 PM