July's motif was "Short But Fabulous," and said to "Read a novella, comic, graphic novel, manga, or short book of poetry." I'm not gonna lie - I'm just not a huge fan of poetry. Like, I feel like I should be because it makes me more cultured or something, but I'm just not really. And I'm most certainly not a fan of it when it's for a reading challenge. I mean poetry books are not the sort of thing you just sit down and read, right? They're for occasional browsing when you want to think and be inspired. Anyway, I went with a graphic novel because that's a genre I really just don't read much. I suppose I should have gone with manga if that was my criterion because I have read basically no manga. Anyway, graphic novel it was.

I was really excited to find the graphic novel Nimona, by Noelle Stevenson, because Stevenson is the creator of the new She-Ra and the Princesses of Power series on Netflix. I absolutely adore the new She-Ra and have watched all the episodes with Junior Mate. (My co-captain has also watched them with us and enjoyed them, so not just for girls, btw.) Anyway, I felt pretty sure I would enjoy this novel, after having enjoyed the storylines and characters from She-Ra so much. I was not disappointed, though I will say that I felt like it ended a little abruptly for me. Actually, I guess it's not so much that it ended abruptly as that I kind of wanted more, which I guess is a good thing!

The story is about a shapeshifter named Nimona, who becomes the "sidekick" to the villain, Lord Ballister Blackheart. It has a sort of...medieval but futuristic setting, which makes it interesting. There's also lots of complexity in the characters and plotline - like, who really *is* the bad guy in the story? And what does evil actually look like? How do events in our past shape us into who we are today? I know these sound like some big questions for the graphic novel format, but I feel like this is something that Stevenson does quite well. The drawing is inviting, and the storyline is engaging and easy to follow, while also making you think. I was able to read it all in a few spurts over a couple of days, and I found the panels themselves easy to follow. Sometimes I find myself frustrated with graphic novels because I can't always tell which panel is next in the action, but this book's panels are clear.

I enjoyed the interactions between the various characters and managed to become invested in them, even in such a short format. To be honest, I would be interested in a sequel, mostly because I'd be interested in seeing more from the characters after the events of the book. However, there was one character in particular that I'd like to see again (don't want to give away the ending, so I'll leave out names) because their loss felt sudden and slightly unresolved to me. I mean, I guess that's how the world works sometimes, right? There are times when you get to say goodbye to someone and know that they are going into a happy future and other times when you don't really get to say goodbye or say goodbye but don't get to know anything about how their future goes. Perhaps this is a personal issue I have - I like to know that the characters to which I've become attached do alright in the end, though there are hints about this character, I'd love to just see them again and smile. But again, I suppose that's the reality of life; sometimes we're left wondering. Anyway, I'd say that if you're a fan of graphic novels, you should give this one a read, obviously. However, if you're a fan of strong female characters and/or blurred lines between good and evil and/or futuristic medieval settings (is that a thing?), you would probably also enjoy this book. 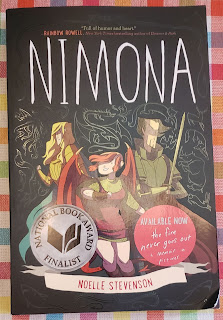 Buy it on Amazon here
Posted by Starship Hecate at 1:56 PM